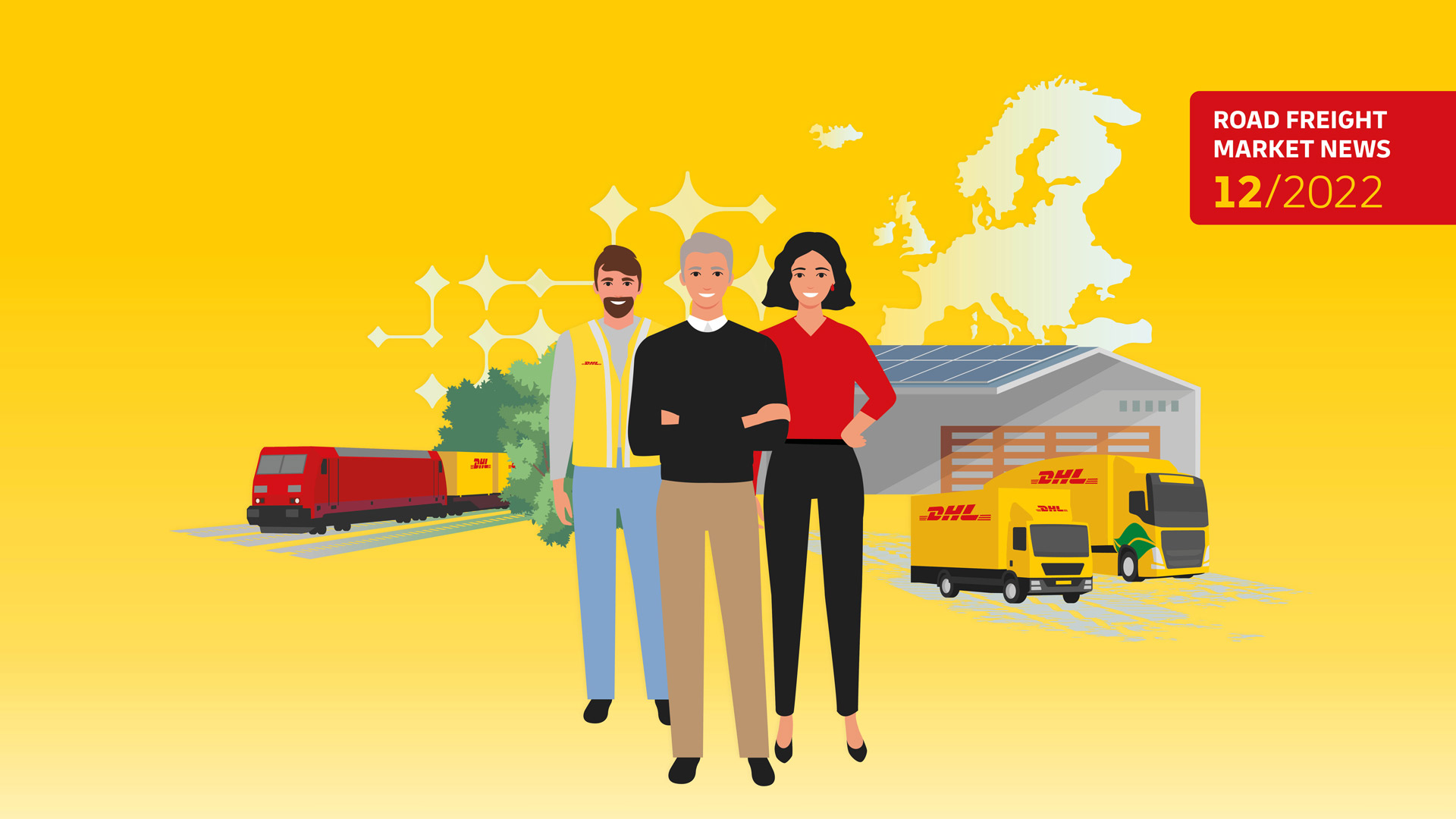 An eventful 2022 is on the home stretch. In the December issue of DHL Road Freight Market News, we therefore not only take a look at the development of the economy and road freight in Europe at the end of the year, but also review the entire year and provide an outlook for 2023. As always, you can read about the trends in October in our last issue.

The impact of the COVID-19 crisis on the European economy, with severe supply chain disruptions and extensive lockdowns, was largely overcome at the beginning of the year. Driven by catch-up effects from the pandemic, the new year began as expected with steady economic growth. This gave hope for a comprehensive economic recovery after the difficult COVID-19 years.

With the Russian invasion of Ukraine at the end of February, the initial optimism quickly evaporated. A war that brought new challenges for the restoration of economic prosperity, not only because of its geographic proximity to the states of the European Union, but above all because of the heavy dependence on Russian energy imports. A major threat was seen primarily in the unsecured energy supply, which would have a significant impact on European industry and in particular on energy-intensive and manufacturing sectors. It was feared that the shortage of energy resources would affect economic performance directly and that the loss of purchasing power due to inflation would send the economy into recession.

Contrary to fears of an imminent recession that arose with the start of the war, the growth trend continued in the first half of the year. The main driving force were continued catch-up effects, which were particularly strong in private consumption. Although in the second half of 2022 this growth trend was increasingly curbed by the consequences of the Ukraine war for the European economy, this was not as intense as originally feared. Following a decline in expected European economic output in the third quarter, S&P Global (formerly IHS Markit) forecasts that Europe’s gross domestic product will grow by around 3.5 percent in 2022. Compared with the previous month’s forecast, this is an increase of around 0.3 percentage points.

European consumer prices have been significantly shaken by the war in Ukraine and energy supply constraints. According to Eurostat, the statistical office of the European Union, annual inflation has nearly doubled from 5.8 percent in February to a high of 10.7 percent in October, with November showing the first signs of easing in months: According to first estimates by Eurostat, the annual inflation rate in November was 10.0 percent. The highest rates were again recorded in Latvia (21.7 percent), Estonia, and Lithuania (both 21.4 percent). In Germany, Europe’s largest economy, consumer prices are expected to rise by 11.3 percent, down slightly by 0.2 percentage points from expectations of 11.6 percent in October.

The enormous rise in inflation contrasts with continued economic growth in 2022, albeit at a slower pace. Nevertheless, most experts still expect an economic downturn in the European Union in the medium to long term. This is anticipated particularly for those nations with a strong industrial sector, such as Germany and Italy – but there are hopes that the recession will be less severe, especially in view of the current development of the annual inflation rate. Apart from the predicted decline in inflation, these hopes are based above all on private consumption. Notably in Germany, this remains strong despite the loss of purchasing power due to inflation. It is also assumed that relief measures or caps on electricity and gas prices, as adopted in Germany and other EU countries, will further counteract the loss of purchasing power and thus strengthen the economy.

Outlook 2023: Inflation Rates Remain at a High Level and the Risk of Recession Persists

What is the economic prospect for the coming year? When it comes to the annual inflation rate, economists, including the EU Commission, seem to agree: A decline is to be expected in 2023, even if the rate remains at an estimated 7.0 percent, well above the European Central Bank’s inflation target. According to the Commission, normalization is unlikely until 2024. Forecasts indicate that the annual inflation rate will then be around 3.0 percent.

Despite the improved inflation expectation in the euro area, it must be noted that while new stimulus packages at the European or national level to offset high energy prices may mitigate inflation in the short term, a price level similar to that in the pre-war years is still considered unlikely in the long term.

With no end to the armed conflict in Ukraine in sight and thus no end to the ongoing pressure on industrial production and economic output as a whole, next year is likely to see what has so far only been postponed: an economic downturn. However, experts are still in disagreement about its extent. The EU Commission, for example, forecasts that GDP could grow by only 0.3 percent (EU and euro zone) in 2023 and even shrink at the very beginning of 2023. Potential energy shortages and the ongoing tense situation on the commodity markets are expected to remain the biggest threat to the European economy.

It is noteworthy that despite the difficult global economic conditions caused by the COVID-Ukraine dual crisis, economic output continued to grow in 2022, even if only moderately. Uncertainty about the further course of the war, the energy price crisis, and rising interest rates substantially weaken economic expectations in 2023 and keep the risk of recession high. Against the background of the persistent unstable geopolitical situation, all economic forecasts are considered uncertain and possible further economic disruptions are hard to predict.

Decline in Production Makes Its Mark on Road Freight

The economic and political challenges were also felt in the road freight market in 2022. The first half of 2022 was characterized by considerable capacity bottlenecks in all modes of transport, but since the traditional summer lull there have been signs of an easing. In maritime transport, for example, the congestion of container ships is gradually dissipating, resulting in a decline in freight rates. In the road freight market, too, the capacity bottleneck prevailing in the first half of the year is dissolving. This is mainly due to lower market volumes. As reported by renowned market participants, the decline in goods produced is clearly noticeable. There are warnings of a consolidation of the trend.

A strong indication of this slowdown is the untypical capacity development currently observed in the market. In the run-up to Christmas, the capacities available in the market usually become scarcer due to the strong increase in demand for transport services. This year, TIMOCOM reports an opposite trend. The index shows an increase in capacities and thus an alleviation of the bottleneck situation. The cargo-to-available space ratio was 64:36 in November, down from 72:28 in October. A comparable ratio was last recorded in the Corona winter of 2020. Unlike then, however, and thus in contrast to the current situation in maritime transport, rates in road transport are not declining but remain high despite more capacity on the market.

Although, according to Eurostat, the weighted average diesel price for the 27 European member states in calendar week 48 was 1.80 euros per liter, 17 cents lower than the last reported diesel price in October (1.97 euros), this decline is not yet reflected in freight rates.

What Is to be Expected in the Road Freight Sector in 2023?

Given the general downturn in economic performance, it can be assumed that the trend observed in the road freight market at the end of 2022 will continue or worsen in the new year, similar to the situation in other logistics sectors. The European road freight market will very likely be faced with falling demand in 2023. How capacities will ultimately develop also depends on which factor will have a greater impact: the increase in capacities due to a demand-related decline in volume or the lack of capacities due to a shortage of truck drivers?

One thing is certain: In the long term, the problem of a lack of drivers will persist and even worsen. According to pessimistic estimates, more than half of driver positions could remain vacant in the next five years, which will be particularly noticeable in France, Germany, Spain, Romania, Poland, and Denmark. A possible COVID-19 outbreak in the winter could further exacerbate the situation if sick leave among drivers or warehouse logistics workers were to increase.

In line with the capacity development, the trend in prices for road freight services in 2023 is difficult to predict at present. Employee wages will continue to rise, particularly as a result of inflationary strains, and price pressure on crude oil and diesel is also likely to continue.

Inflation, fuel prices, and driver shortages will have a decisive impact on operating costs and freight rates in road transport in 2023 (and beyond) – but how they will actually develop depends on the many unpredictable factors described above. Therefore, any forecast for the European road freight market is somewhat vague.

In unpredictable times, flexible solutions are more important than ever. Despite all the imponderables, you can rely on DHL Freight to follow and evaluate market events very closely, especially during the crisis. This enables us to draw the right conclusions at any time: for transport quality that always remains at the same high level.

The next update detailing the start of 2023 in the economy and road freight market will be available in early February.

[By 2019, the European Union aims to create the conditions for communication between vehicles and traffic infrastructure and thus reduce congestion and accidents.

[Austria introducing new toll fee regulation for trucks in 2017. The additional costs for the transport industry will remain manageable.