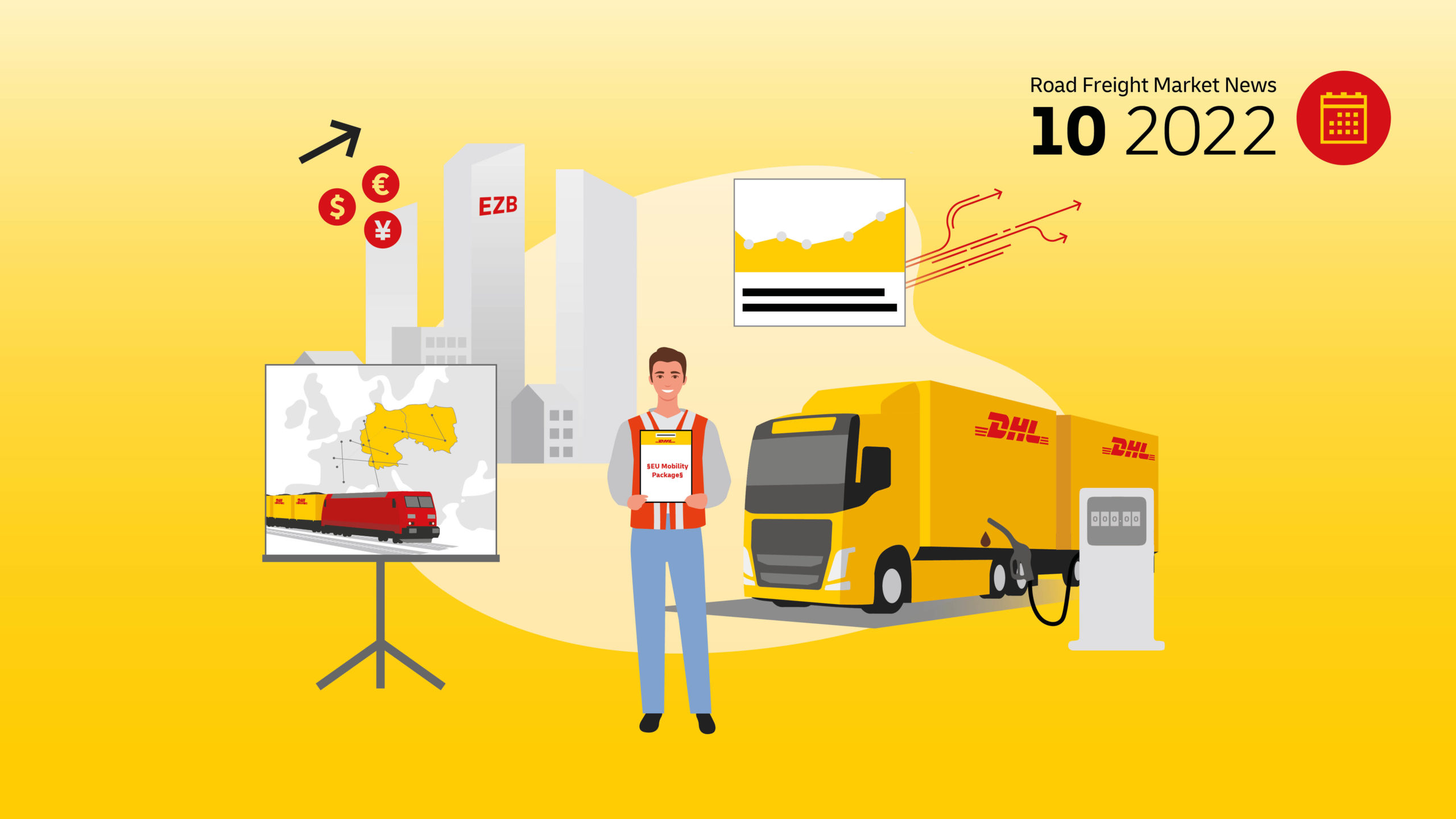 This new issue of DHL Road Freight Market News takes a closer look at the economic conditions in Europe at the end of the third quarter and their impact on the European road freight market. As usual, you can find more information on last month's developments in our previous issue.

The negative effects of the Ukraine war are increasingly being felt in the European economy. In particular, the impact of reduced or interrupted Russian gas supplies is becoming more and more apparent in the economic indicators for September.

S&P Global (formerly IHS Markit), for example, predicted in September that the European economy would grow by around 2.8% in 2022. Just six months ago, the forecast economic growth for this year was around 4%. This means the economic downturn in the euro zone continued in September, indicating a continuous economic decline in the third quarter. The slump is being driven by the manufacturing industry, which is particularly affected by the energy crisis in Europe.

Rising energy prices contributed to further cost burdens for companies in September. Across the EU, this led to companies either cutting back on production or stopping it entirely. Many different sectors and countries have been affected, such as glass manufacturers in France, steel mills in Spain, and fertilizer factories in Poland. As a result of the tight situation, there is a growing threat of corporate insolvencies, indicating a further acceleration of inflationary pressure.

Propelled by the rise in energy prices due to the Ukraine war, the inflation rate climbed to a new record level of 9.1% in September. This was reported by the statistical office Eurostat on the basis of a flash estimate. That is more than four times higher than the European Central Bank’s (ECB) inflation target of 2%. Once again, the three Baltic states recorded the highest inflation rates in the euro area, with rates exceeding 20%. The annual inflation rate in Estonia, for example, rose to 25.2%. In Germany, the inflation rate calculated in accordance with European standards was 8.8%.

The ECB had performed a turnaround in interest rate policy as a means of combating rampant inflation, setting key interest rates higher for the first time since 2011. With its second rate hike at the beginning of September, the ECB followed up with an unusually sharp increase of 0.75 percentage points. Since the introduction of euro cash in 2002, this was the biggest increase in interest rates, bringing the key rate to 1.25%. According to Joachim Nagel, President of the German Federal Bank, however, the two most recent interest increases by the ECB were only a start: high inflation would make further interest rate hikes necessary in the course of the year. The ECB’s next interest rate meeting is scheduled for October 27, and the last meeting this year will be held on December 15.

The dimensions that central banks in Europe have to deal with can be seen in the example of Germany: the ECB expects prices in Germany to continue to rise, probably reaching their peak in December. Perhaps then also with double-digit inflation rates. This was last the case in the fourth quarter of 1951.

Outlook: The Economic Situation Will Continue to Deteriorate in the Coming Months

Various economic institutes (including the ifo Institute and the Leibniz Centre for European Economic Research in Mannheim) have dramatically lowered their economic forecasts for this year and also for the coming year. The prospects are now considered to be worse than expected as recently as August. According to the experts, the economic situation in Germany – Europe’s largest economy – will also deteriorate significantly in the coming months.

Economists have been warning for some time that the German economy could slip into a so-called autumn/winter recession at the end of the year. It is assumed that this development could be representative for the entire euro zone. The cuts in gas supplies from Russia in the summer and the resulting price increases have counteracted the economic recovery after the COVID-19 pandemic. The high inflation rates are also causing the real incomes of private households, including savings, to melt away and reduce the people’s purchasing power.

Energy issues have long been of fundamental importance at European level and are now becoming so for logistics. The situation in national and international logistics is currently very tense. The war in Ukraine and the resulting lack of Russian gas supplies are exacerbating the structural problems in supply chains caused by the coronavirus pandemic. Logistics is burdened by the significant rise in energy prices: transport companies are struggling to cope with sharp increases in fuel, gas, and electricity prices.

The rise in energy costs is having a particularly dramatic effect on the production of the diesel exhaust fluid “AdBlue”. In Germany, there was a shortage of AdBlue in September that threatens to spread throughout Europe. Since a large number of trucks in the forwarding, logistics, and transport industry run on diesel and are dependent on AdBlue, there are warnings of supply bottlenecks due to the AdBlue shortage.

This is also reflected in the price of diesel itself. Compared with the previous month, the price has again risen by a minimal 2 cents per liter: Eurostat reports a weighted average diesel price of €1.84 per liter for the 27 European member states in September. In August, the weighted average price was still 1.82 euros per liter of diesel. Thus, the price of diesel in the European Union remains at an  all-time high – about a year ago, the price was still at 1.37 euros per liter (August 2021) and thus shows an increase of 33% compared to the previous year.

The situation regarding capacity utilization in road freight had slightly relaxed in recent months, but then worsened again in September. The typical seasonal effects of the summer months are increasingly fading in view of the upcoming peak season in fall and winter. TIMOCOM, for instance, reports an average ratio of freight to available space of 78:22 in Europe. This reflects a renewed decline in capacity in the market compared to the previous month and illustrates ongoing congestion (73:27 in August and 82:18 in July 2022).

After Germany’s most recent legal specifications to give temporary priority to energy transports by rail (Energy Security Transport Ordinance - EnSiTrV) to ensure the operation of power plants, refineries, and electricity grids and thus guarantee the energy supply, now Poland is following suit by prioritizing coal transports by rail. As reported in the previous issue of our Road Freight Market News, the priority of energy shipments on rail is expected to have a far-reaching impact on the existing capacity of all modes of transport, especially road. It is predictable that roads will have to absorb freight not being shipped by rail and inland waterways.

The growing need for transport of the energy sources coal, oil, and gas by rail and waterways is further increasing the pressure on transport modes that are already working to their limits. For rail in particular, demand for capacity is higher than ever. Unfortunately, this is accompanied by a particularly high level of construction activity in the rail infrastructure sector, which in turn leads to a high susceptibility to disruptions and a reduction in quality. It is still uncertain how the situation will develop in view of the upcoming peak season and to what extent costs for road freight will rise. In general, however, the economic environment is expected to remain fragile and to become more challenging, for example in terms of rising prices or capacity bottlenecks.

DHL Freight will keep on monitoring and evaluating market events and their impact on the road network intensively to guarantee adequate quality. The ongoing volatility in the market is putting open and transparent communication at the top of DHL Freight’s priority list. The next update with details on the development of the road transport market in October will again be released at the beginning of next month.

[Concentrated energy in a small space – that is the recipe for the success of lithium-ion batteries. But as usage increases, so do the risks: The energy bundles are dangerous goods, which must be handled professional.

[Drones can be more than just a toy or military equipment – they save lives!

[In the 2nd quarter of the year the European transport market recorded a slight cargo overhang with an average cargo to cargo space ratio of 52:48.