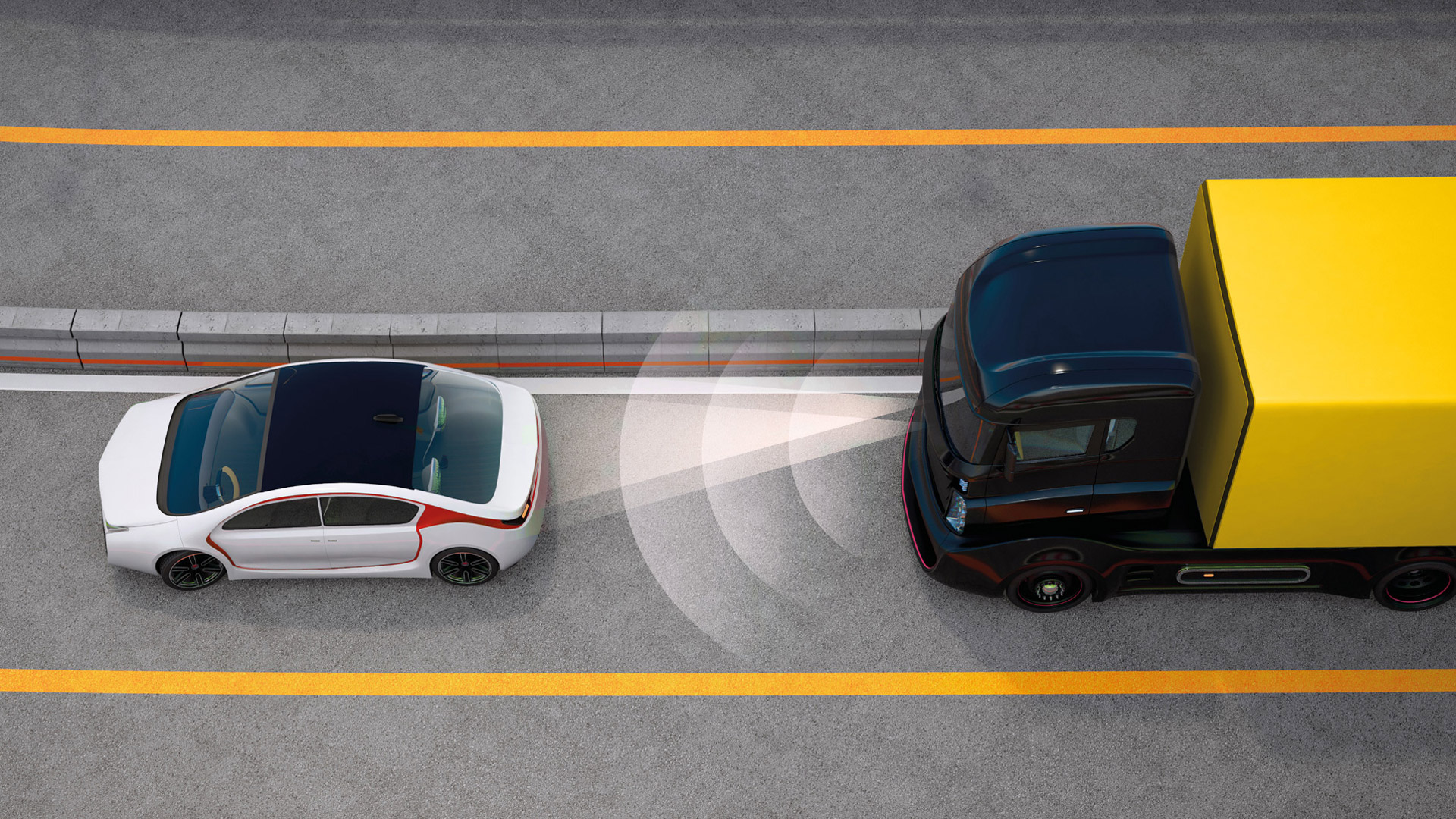 What will the future of mobility be like? Sustainable, safe – and maybe even autonomous? Digitization and the associated automation of processes have been changing entire industries for years. The automotive industry could be on the verge of the next major upheaval. But before cars drive autonomously, trucks will probably be the first to do so.

The basic idea behind autonomous driving is quite simple: instead of humans accelerating, braking, and steering, the vehicle does this by itself. Which means that the driver becomes a mere passenger – and can devote himself to other things while on the road: reading, working, or simply closing his eyes. For the driver, autonomous driving is primarily a means to greater comfort. At the same time, safety is increased because a computer makes fewer mistakes than a human and has a significantly shorter reaction time, both of which can make all the difference at the decisive moment.

Self Driving Trucks in Germany

Autonomous driving could become a real game changer in logistics: when it comes to trucks, it not only means a reduction in the driver’s workload but may even imply that a driver is no longer needed at all. At present, strict regulations apply to truck drivers, prescribing driving times and breaks, for example. For this reason, the truck has to stop frequently. The aim of this is to minimize the risk of fatigue and prevent possible driving errors. However, a truck that does not rely on a driver would not have to take these breaks and could move continuously, which is made possible by autonomous driving.

“It should not be forgotten that this technology can save many lives. The perfect technology may not yet exist, but certainly one that acts significantly better than humans.”

One might think that dispensing with human labor would lead to a loss of jobs, but that assumption ignores the industry’s current critical challenge: the lack of truck drivers. According to estimates, Germany alone will have a shortage of around 185,000 truck drivers (GER) by 2027. In 2020 there were already 45,000 qualified drivers lacking. In this tight situation, autonomous trucks could relieve the logistics companies in Germany and keep the global transport system, the supply chains, and thus the supply of citizens running smoothly.

Autonomous Driving: This is the State of the Art

The prerequisite for autonomous driving is first and foremost data. Just as we use our senses to pick up information that is then processed by the brain to make decisions, autonomous vehicles collect data with their sensors. Countless cameras at the front, rear and sides comprehensively scan the vehicle’s entire surroundings, immediately detecting potential obstacles, calculating the distances to them, and analyzing the speed at which they are approaching. Based on this data, the on-board computer determines how the vehicle should be moving.

What is still at an early stage in road traffic has long been standard in aviation and aerospace. When aircraft reach a certain altitude, pilots can activate the autopilot and relinquish active control of the aircraft. Only when the aircraft descends below a specified altitude or some other intervention is required does the pilot resume control. This is made possible by sensors that transmit signals to the on-board computer – from there, the control pulses are forwarded to servo motors that hydraulically balance the aircraft’s rudder.

This takes the strain off the pilot, who can dedicate him- or herself entirely to supervising the aircraft’s functions and monitoring the airspace. The pilot is thus ideally prepared for any potentially difficult situation. So, everybody who has ever sat in an airplane is already familiar with the experience of autonomous mobility – probably just without consciously perceiving it as such.

In the future, exchanging data between different trucks and cars will contribute to the safe driving of autonomous vehicles. In a networked road traffic system, technologies such as 5G enable vehicles to communicate with each other in real time and share their location with other vehicles – as well as their speed or other relevant information.

Networking covers areas that cannot be adequately monitored by one driver alone. If potential sources of danger are lurking in these blind spots, the vehicle can be informed of this at an early stage and intervene autonomously. Because even if the reaction time of an autonomous car or truck is shorter than that of a human, the braking distance is not. And so the right information at the right time is crucial to avoiding an accident.

Human Drivers: Still Superior to Autonomous Driving in Some Respects

Autonomous vehicles not only recognize potential obstacles, but also road signs – and the associated traffic rules. They know which lane they are in, which direction they are heading, or which right-of-way rules apply. They even consider probabilities and recognize the type of obstacles. For example, is it a pedestrian, a car, or just a stationary obstacle? Autonomous vehicles are using probabilities to predict whether an obstacle will move out of the danger zone on its own or whether it will remain stationary.

The technology of autonomous driving is well advanced today. However, it still has its limits. In many respects, it is already superior to the human driver, but especially when it comes to comprehending complex situations, humans are still one step ahead. The technology does not respond to nonverbal communication and is not capable of resolving unknown complex situations – not yet.

The Significance of Autonomous Driving for Logistics

Autonomous driving is usually looked at from the driver’s perspective, but the development of autonomous technologies is particularly relevant for the logistics industry. On the one hand, because of the urgent shortage of truck drivers already mentioned above. On the other hand, it can make logistics more sustainable, more secure, and more efficient. There are already many concepts and approaches on how this can be put into practice.

Arguments for Autonomous Driving in Logistics:

Dozens of autonomous driving tests are currently underway around the world. They are designed not only to monitor the safety of the technology, but also to identify where efficiency improvements in traffic might be possible: how traffic jams can be avoided, how distances can be covered more quickly, and how emissions can be reduced. It is very likely that we are still in the early stages of development, but groundbreaking progress can be expected in the next few years, and not just because of the driver shortage.

Despite all the enthusiasm about autonomous driving, however, one thing must be understood: the industry still has a long way to go. Firstly, the technology itself needs to become even more refined, reliable, and safe. Secondly, the European transport network is so far only partially suitable for autonomous driving. For initial field trials, though, some parts of the entire road network could be designated to the testing of autonomous technology. The questions to be answered after the test runs are: How does the transition from a route network with drivers to one without succeed? And how efficient would the use of drivers still be compared to the autonomous system?

And then there is the question of the legal basis: who is responsible if an accident does occur? The vehicle manufacturer, the software developer, or rather the (co)driver, operator, or owner of the vehicle? Even if this question finds an answer, it will take quite some time before the legal basis for autonomous driving is established – especially in Germany and throughout Europe.

The future of mobility lies in our hands – even if those hands are no longer at the wheel. Already today, various assistance systems support us on the road, the availability of key technologies such as 5G is expanding, and vehicle manufacturers and software companies alike are working meticulously on the mobility of tomorrow. In the long term, this will not only counteract the lack of truck drivers – most importantly, it will increase the safety of road users. After all, human error is still accountable for 90 percent of all accidents.

It will probably be decades before we no longer need a steering wheel in our cars and trucks – during this time, technology will be further developed, legal issues will be discussed, and logistics will be prepared. DPDHL Group is dedicated to fulfilling its part and helping to shape the logistics of tomorrow.

[To really push ahead with electricity, gas and hydrogen – that’s the goal of the German national strategic framework (NSR) for the construction of infrastructure for alternative fuels. Subsidies for heavy goods transport are also included. The Federal Cabinet adopted the NSR on 9 November 2016.

[The price of oil has risen about 20 percent since the beginning of August and again surpassed the psychological mark of $ 50 per barrel, which has also boosted the price of diesel. The crucial aspect for the rise in oil prices was an improvement of the general mood on the oil market.

In 2021, the toll charges for HGVs have also been increased in several European countries. In addition, there are further ...